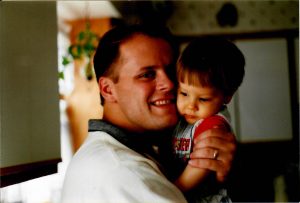 I have to recite a story I tell every year about this time. Bare with me, if you are new to JJ’s, it’s a good one…

On August 26th, 1997 I was the Bar Manager and ran the accounting department for Theo’s Great Food. You remember Theo’s? Great night life, great food, French guy behind the line making some awesome food. Side note… shout out to my friends at Chef Dominique’s Catering, they do some pretty awesome stuff.

Anyway, that morning I was minding my own business. Getting books done, paying bills. That sort of stuff. Got ready for the lunch rush, and sure enough, it was a busy one. Full house by 11:45am. I got a call around 12:15pm from a sales guy at Terry Schulte Auto across the street proclaiming… Your building is on fire.

Apparently, and it’s probably still under investigation, one of the cooks, or dishwashers, took a smoke break and flicked his butt into a pile of cardboard behind the building. I knew it wasn’t me because I had quit smoking earlier that year… The fire made quick work of the exterior of the building wall, but the fire department was there within minutes and snuffed it out before any serious damage. Shout out to SFFR.

We had evacuated the building, and decided at that time it would probably be a good idea to stay closed for the day. We had already had a planned meeting with the entire staff to go over some sexual harassment protocols, so I went ahead and finished my preparation for that meeting.

Around 2:00pm, I can remember I was standing up front at the podium checking the reservation list, and informing folks that we would be closed for the night, and I get another phone call, this one from Jean. “Well, I just had my appointment with Dr. Wurtz, she thought it would be good if we checked into the hospital.” My response… “What for?” You see, Jean was almost exactly nine months pregnant, and this appointment was the final appointment prior to the big event, but I was not expecting so soon.

Not appreciating my response, Jean proclaims, “What the f*** do you think for??” I said, “I see, ok I’ll be right home.” I got home at 2:45pm-ish and picked her up with her necessities for the short stay in the hospital, and we were off to, then, Sioux Valley.

I won’t go into too many details, but most of you moms out there that hear about her short labor wish I would just stop talking. That being said, she didn’t have enough time for the epidural she had been promised, so by the time my boss, George, called me to find out where the sexual harassment presentation info was, the timing couldn’t have been worse. I told him, on my desk, and said I was kind of busy.

Right around 4:35pm Aaron Nicholas Slattery was born, and our world was changed forever. I am certain that as the years go by some of the details of this day get changed, or embellished, or forgotten. Happens. I try to recite it every year, because it is a pretty good story, hoping to keep the narrative alive.

Happy Birthday, son. Hope you have a great day, and a great 24th year!