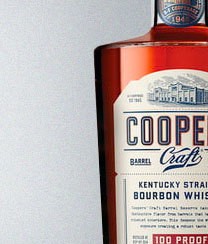 We love Brown-Forman Whiskey Products. Jack Daniel’s, Old Forester, Woodford Reserve and a handful of other fine American made whiskey products. Cooper’s Craft was introduced in the Louisville as a way to honor the barrel makers at The Brown Forman Cooperage. This is where they make the barrels for Brown-Forman bourbon products. The success of the product launch compelled the company to expand the production of Cooper’s Craft, and also add a Barrel Reserve expression.

Since 1945, Brown-Forman has remained the only major distiller to own a new barrel cooperage and raise their own barrels, allowing them complete control of the bourbon-making process from start to finish. The master coopers rely on a proprietary toasting and barrel-making process to deliver unique and award-winning bourbons ranging from light and gentle to bold and complex.

Tom’s Tasting Note: When I first tried Cooper’s Craft, it was the original version in Louisville. It was fine. Much like Old Forester 86 Proof. When Cooper’s Craft was released nationwide and the 100 proof was added, I was impressed by the complexity that came with that extra alcohol. Plus they select specific barrels to go in this Barrel Reserve edition.

I specifically chose this whiskey for this day as there is a connection to World War II. As you know, today is Pearl Harbor Day. During World War II, the Brown-Forman Cooperage facility was used to make airplane parts for the US Air Force. At that time it was operated as the Bluegrass Cooperage. After the war, the cooperage was purchased by Brown-Forman and has been owned by the company ever since, making barrels exclusively for their American made whiskey products.