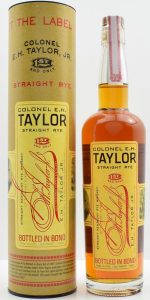 I think you will enjoy this Sunday Sipper. I know I do. It’s a tough get lately, but if you get a chance to enjoy a bottle, take it.

The Buffalo Trace Distillery produces a number of different brands. One of the most distinctive brands, in style, reputation and consistency, is Colonel E.H. Taylor. Colonel Taylor, the man, was pretty remarkable in the history of bourbon making. Here is an historical perspective from the Buffalo Trace website…

E.H. Taylor, Jr. was a visionary in the whiskey world with a mind for distilling that was years ahead of its time. He founded a world class Distillery, made advancements to the industry, and fought for the purity and legitimacy of bourbon gaining him the title of the “Father of the Modern Bourbon Industry.”

Taylor is celebrated for the countless innovations he contributed to the bourbon industry in his time. His first involvement in the industry came as a banker, aiding in the organization and financing of several distilleries. Through his experience as a banker, Taylor became personally acquainted with several prominent whiskey makers. Taylor’s 1869 purchase of a small Leestown distillery that he christened O.F.C. was his first foray into distilling, making an immediate mark on the industry by modernizing, expanding and upgrading the plant. Among his innovations were copper fermentation tanks, state-of-the-art grain equipment, column stills, modernized buildings, a more efficient sour mash technique and a first-of-its-kind steam heating system still used in the barrel warehouses today.

The O.F.C. Distillery was purchased by George T. Stagg in 1879 and remains an integral part of Buffalo Trace’s history. Taylor is remembered as the last of a breed, a true bourbon aristocrat who was responsible for linking the classic and modern eras of bourbon making.

Tom’s Tasting Note: The complex, spicy nature of this rye makes it very alluring to fans of rye, and other complex American made whiskies. Dried fruit, black pepper, and a touch of fresh dill on the finish. As indicated, it is an excellent cocktail rye in a Manhattan, but is also enjoyable over a large cube by itself.