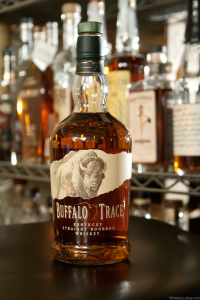 When I was determining the bottles for this Holiday Countdown Calendar I had two goals. One, to take you on a journey of palate exploration, and two, share some things in the hopes that you appreciate the aforementioned journey a little more. Which brings us to Christmas morning. I am not sure what some of you were thinking this would be. I’m guessing some of you thought I would share something like Pappy Van Winkle, or other hard-to-get bourbon. Some of you may have thought I would go down the road I went, and share something truly unique, like a 1st Edition Single Barrel from Buffalo Trace.

In May of 2015, I took my second trip to Louisville Kentucky to select a Knob Creek Barrel at the Jim Beam Distillery. We ended up, in the end, buying three barrels from that trip, but that’s another story for another day. We had some time in our schedule to visit and do a tour at Buffalo Trace. Which was great, because I did not get there on our first trip in 2014, as it did not fit into the schedule. When we went to Buffalo Trace, I had some contraband in my bag… three barrel samples of Buffalo Trace Bourbon.

We had gotten our first allocation of a Buffalo Trace Barrel earlier that year, but not soon enough to do an on site selection. I thought it would be fitting to bring the barrel samples that were sent to us in South Dakota, and do the selection at the distillery. It was agreed by our host that while it wasn’t normal, he would make it work.

He took us back to a small tasting bar in the back of the gift shop, where we were met by a nice lady, whose name escapes me. I am doing some research to figure it out, because she is connected to one of the former Master Distillers at Buffalo Trace. Either Elmer T. Lee, or EH Taylor. We poured our samples into Glencairn glasses. We tasted, and we selected this barrel. We have, since then, purchased eight more barrels of Buffalo Trace over the years, and they all certainly have their own stories (Aaron’s 21st Birthday Barrel… Have You Met Brad?). I hope you have enjoyed this one.

Tom’s Tasting Note: This whiskey speaks for itself and the story is pretty cool. I won’t belabor you with nuances and flavor profiles. This one is near and dear to me, because it is the first pick from Buffalo Trace, followed by eight more, a few barrels of Blanton’s and one Eagle Rare. We have met people in this process who I consider friends. And I look forward to seeing them every year when we visit, not all that different than far away family. We have shared this barrel selection experience with friends, family and customers over the years, and they all come away from it with a new found appreciation for what we do as an industry. Specifically as it relates to the people component. Although… the product is pretty damn good too.

I am humbled to have been given the opportunity to guide you on this journey, and have learned a considerable amount myself. It has provided me a renewed focus on what is most important in this adult beverage journey. The people. Look forward to more journeys in the upcoming New Year.

Merry Christmas and best wishes in 2021!