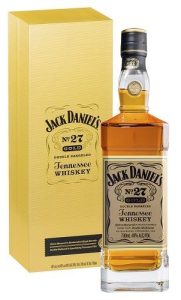 This is our first of a few crossover pours. Both White and Black Cap Editions will be tasting the Jack Daniel’s #27 Gold. Over the years, the Jack Daniel’s Distillery has done some pretty edgy stuff, but this one certainly takes the cake. When it was released in late 2018, there wasn’t a whole lot of fanfare as it was released mainly in Duty Free shops. When it was released in certain markets, like ours, it sat on our shelf for a bit, but then all of a sudden was gone. Next thing we knew it ended up on our allocated whiskey list, and we were only getting a few bottles here and there. What’s the story?

This whiskey is the original Jack Daniel’s recipe, aged for five or six years, then aged again in maple barrels. But, even before that, it goes through a double mellowing process to give it ultra-rich texture before even going into the first barrel. The second run of aging in the maple barrel allows for even more smoothing, character and complexity.

Tom’s Tasting Notes: This whiskey is remarkable from first sip to last, even for those of you who regularly proclaim, “I don’t like Jack Daniel’s”. Which is kind of the point of it making this year’s 2021 Spirited Holiday Countdown Calendar. Never judge a bottle by its branding, as often times you will be surprised by what’s inside. This whiskey a smooth sipper at 80 proof. Notes of maple syrup, bacon, honey, caramel, a soft oakiness, and muted spices. The taste starts off light at first, then develops a good spiciness balanced by honey, caramel, and of course, a hint of maple. The finish is long with lingering spices and a touch of brown sugar.