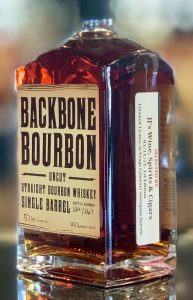 During the waning days of the pandemic (pre-widespread vaccination ability), we were starting to have a bit of a drought with barrel picks, so we had to make several barrel selections with tasting kits. The Backbone Uncut Single Barrel – JJ’s 1st Edition Single Barrel was one of these selections. Aged five years in a new charred oak barrel, then finished twelve months in a Venge Napa Valley Cabernet Barrel. It’s a great expression of a wine barrel finished bourbon, and we were happy to put it among our single barrel library.

Tom’s Tasting Notes: When selecting barrels from sample pours, it makes it difficult, because there isn’t really much of story to tell along with the selection. We improvised during the height if the pandemic by inviting good friends into the mix when selecting barrels. This was the first of those collaborations, and it leant to a pretty great selection. Spice, caramel and brown sugar notes with a solid core of texture from the extra aging in the wine barrel.

Side note, if you are interested in being a part of our tasting panel for future barrel picks, whether here or in Kentucky, drop an email to tom@jjswine.com to get on the list. We don’t have too many people participate in these things as there isn’t much whiskey to share, but we do like different opinions and experiences. If you are interested in travelling for a barrel selection, so the same, but be prepared to pay. When we take small groups on barrel expeditions, we do it VIP style with charter flight and other first-class amenities! We are planning two such trips in 2022, but the locations are yet to be determined as the powers that be decide what will be bestowed upon us for barrel selections next year (snark intended.)