Lux Row Distillers is nestled just outside the town of Bardstown. There, they have undergone some major renovations over the last five years. Giving them the ability to increase their production capacity almost five-fold. That’s pretty impressive, and at the right time as things continue to heat up in the bourbon world. We got to visit there this year and select two barrels of bourbon, but that is not what we are talking about today. 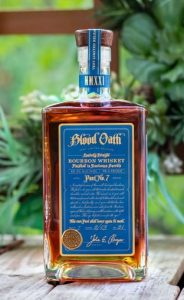 The Blood Oath line of whiskies started a few years back. The idea being to craft a whiskey from sourced barrels, but not disclose where the barrels were sourced from. The speculation runs wild every year as to where each “Pact” has been derived from, lending to some fairly fun fodder for the internet bourbon crowd. This particular “Pact” is comprised of 8- and 14-year-old barrels that were blended then finished in Sauternes Wine casks. Bottled at 98.6 Proof (the temperature of “Blood”), this bottling was released with lots of excitement, and rightly so.

Tom’s Tasting Notes: The first two Blood Oath Bourbons were not all that stellar. As most of you know, I am a fine of higher proof bourbons, and I think that at higher proofs, the earlier “Pacts” of Blood Oath would have been better suited. That being said, once they settled into a style of blending that is more suited for the trademark 98.6 proof, I feel as though they have done remarkably well with Pacts 3 all the way through this one, Pact 7. This is a very “fruit-forward” bourbon with notes of honey, apricot and citrus.

The palate is full bodied with a dry and ever-lingering finish. The Sauternes finish gives this a wonderful red fruit nose that is reminiscent of some of the great Sauternes finished whiskies I have tasted before. My favorite being the Hillrock Solera from New York that has been elusive since they pulled their distribution from our market.

Another sourced product from Lux Row Distillers that is believed to be from Heavan Hill. The mash bill is disclosed on this particular bourbon, which would indicate the same. 78% Corn, 12% Malted Barley & 10% Rye. Bottle at 117.0 Proof, this bourbon is certainly one to enjoy with a slight chill or a touch of water.

Tom’s Tasting Notes: When Joe and I went to Lux Row to select Ezra Brooks and Rebel Barrels, this was the flavor profile we intended for our Ezra Brooks barrel but ended up with something totally different. It’s another example of how time and temperature can change a whiskey, even though it starts out as the same thing. This is a very enjoyable bottle, especially if you like them hot and oaky. By contrast, our Ezra Brooks Single Barrel is only three points proof higher, is a bit spicier, but finishes much more smoothly than the Old Ezra 7. If you have picked up a bottle of our Ezra Brooks Single Barrel, I would recommend trying this two side by side.

Standard bourbon notes of vanilla, Caramel, toasty oak and dark cherries on the finish. The 7-year age gives this bourbon just a bit of an edge on complexity compared to our single barrel.