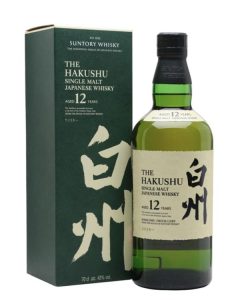 Japanese whiskey has become more and more… hard-to-get? Especially the good stuff. Why? Because it’s that good. And the rules have changed a little. Last year, the Japanese government issued new rules as to what may be classified as “Japanese Whiskey”. The rules are fairly simple and model the rules of Scotland and Ireland. Must be aged for a minimum of three years on Japanese soil, contain a specific mash bill of malted barley and use local water. Why is this important? Because it reclassified about 80% of the Japanese Whiskies on our shelf to the classification of “World Whiskey.” Doesn’t mean they are bad; they just aren’t what they were purported to be.

Tom’s Tasting Note: Aged statement Japanese whiskey used to sit on our shelf. More dust collecting bottles that nobody seemed interested in… until they were. We had 12-, 15-, and 18-year-old bottles just waiting for the right customer to stop in and ask for them. Much like our bourbon way back then. This whiskey is divine, and I wish we had more to sell. Herbaceous is the key here. Basil, pine needle and green apple on the nose. Sweet pear and kiwi on the palate. Very tasty.