What is a Barrel Strength whisk(e)y? People ask this question all of the time, and at one time it was an easy explanation. The whiskey in the bottle is the same “proof” as it was in the barrel, or barrels. It’s gotten a little more complicated lately with terms like “Full Proof” and “Cask Strength”, both of which may mean something a little different than “Barrel Strength”.

“Full Proof” in the 1792 line of bourbons refers to the proof at bottling equal to the proof of the whiskey at the time the barrel was filled. Because there is always fluctuation in proof during the aging, this method makes the final proof consistent. “Cask Strength” is being used by a few bourbon makers to refer to a higher proof rendition of their brand, but not necessarily “barrel strength”. Confused yet? Welcome to our world. Hard to say who got the best of today’s samples. If you were lucky enough to get both, please try them side by side. 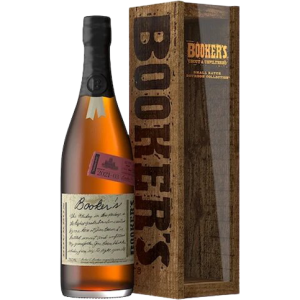 We had cool shelf glorifiers for back bars and retail shelves that we used to make these bottles look pretty because nobody was really interested in buying them. I mean, $35 for a bottle of bourbon. Who would pay that?

Booker Noe was never interested in a “Single Barrel” bourbon, and there was never a bottling of any single barrel product under the Jim Beam Distillery family of brands until after Booker’s passing in 2004. The first single barrel release was Knob Creek Single Barrel (120.0 Proof) in 2010, and as the industry started to pivot into additional single barrel offerings, Beam has held fast to the notion that Booker never would have approved of his namesake brand being used for a Single Barrel product. So as the demand for Booker’s started to skyrocket, batches of Booker’s started to hit the market in periodic releases starting in late 2013 with fun names paying homage to Beam/Now family history. We now get quarterly releases of Booker’s, in very small amounts, the latest of which is… Bardstown Batch at 125.5 Proof.

Tom’s Tasting Note: I’ve told this story before, but for some of you newbies, you might enjoy this. In 1998 I travelled with my former boss prior to opening the original store for some training on our point of sale. The trip was to Chicago. It was a quick trip filled with lots of office work, but we did find some time for a little fun.

On the last night we were there, we got back to the hotel after dinner and Tom was headed to his room to do some work, and I found myself in the hotel bar, sipping on Booker’s Bourbon. Suffice to say, I slept really well that night. Booker’s is aged in the heart of the rack house where the barrels see a lot of heat, and very little sunlight. The batches are aged 6 years to not-quite 8 years, then hand-selected by Fred (and now Freddie) Noe for each batch. Hot, spicy, caramel and toast. Hands down one of my favorites, and I am sorry to say, a bottle will always find its way to my house.

Stagg (Jr.) is growing up. The batch you are tasting is Batch 16, released in the Summer of 2021. She’s a hot one at 130.9 Proof. Batch 17 was just released, and we will have a couple of bottles on upcoming raffles, but we will be keeping some back to make sure we always have pours of Stagg (Jr.) In JJ’s Bar. When Batch 18 is released, the branding will drop the “Jr” from the label, and it will just be called Stagg. Why is the important? When the brand was released in 2013, it was released as a younger version of the 14-16-year-old barrel strength unicorn, George T. Stagg. Part of the Buffalo Trace Antique Collection of bourbons.

In 2021, there was no release of George T. Stagg Bourbon. There are a few different speculative narratives as to why the bourbon was not released this year, but the story told by Master Blender, Drew Mayville (I’ve met him before. Neat guy), is that it just didn’t meet the standards of the George T Stagg flavor profile at 14-years-old. The barrels have been set aside for additional aging to see how they develop. Anyway, back to Stagg (Jr.) We think that the dropping of the “Jr” indicated it may be the only version of Stagg going forward. I doubt it, but time will tell.

Tom’s Tasting Note: There are striking similarities to Stagg (Jr.) and Booker’s. They are both aged around 6-7 years in the heart of the rack house, then selected for unique flavor profiles before final blending and bottling. Each batch is truly unique, and I encourage anyone to try them side by side wherever you can find multiple expressions. Chocolate and brown sugar are the nuance components that you get to in this pour after a little bit of water to quell the heat. Enjoy this sweet, spicy and complex version of Stagg (Jr.)