What makes an exciting spirit? A few boxes to check. Not every spirit we have tasted thus far checks all of the boxes… A couple may have, but this one certainly does. 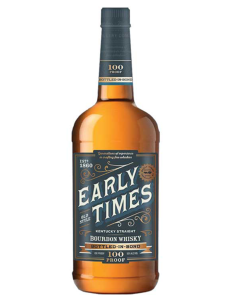 Early Times Bottled in Bond was released in early 2019. At least in this market. A historic brand, dating back to the 1870s, and at one time the most popular bourbon in the country in the 1950s. It had been reformulated in the late 70s/early 80s as an “Old Kentucky Style Whisky”, a blend of aged bourbon and light whiskey. In 2017, The Brown-Forman Company re-released Early Times Bottled in Bond as an upgrade to the old standard label, reviving this historic brand.

Tom’s Tasting Notes: During the Spring and Summer months this year, I’d sit and have an afternoon cocktail with my friend Bob. Bob “encouraged” me to do this because of the chaotic nature of things this year, and that sometimes you just need to sit and take 15 minutes to enjoy a beverage with an old friend. And he was right. I changed my choice of beverage a couple of times this year until I settled in on Early Times Bottled in Bond and Coke. I honestly hadn’t tried the ETBIB until then and was somewhat taken aback by the character of the bourbon, even when mixed with a beverage like coke. We experimented a little more with the brand and found it to be exceptional in our 3.Old Fashioned Recipe as well, so it became a staple in our beverage service kit moving forward. It’s also our premium rail pour when someone requests a “Bourbon and Coke” in JJ’s Bar. Rich caramel flavor and aroma, full-bodied with spice and vanilla at the end. This is a very good quality bourbon. It’s a great price. It’s available. All boxes checked. Enjoy!