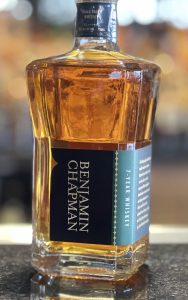 Fitting that we chose this whisky on Repeal Day. American Bourbon was still in a bit of infancy at the time that Prohibition started, so most of the distilleries ceased production and died during prohibition, except for those that were producing for “Medicinal Purposes”. So where did most of the whisky come from that you found in a local speakeasy? Canada. For the most part. It was easy to get it across the border, and they never stopped making it, so it was obviously the product that was going to be easiest for speakeasy owners to procure.

Benjamin Chapman is a new brand for us in 2022. Canadian Whiskies don’t hold much of the excitement amongst enthusiasts as American made bourbons and ryes, but this one kind of got our feels when we tasted it upon arrival. Made from 51% 10-Year-Old Canadian Rye and 49% 7-Year-Old Canadian Wheat, this whisky offers a bit more sophisticated taste that most of the other Canadians on the market.

Tom’s Tasting Notes: Distinct aromas of cinnamon, dark cherry and vanilla. The mouthfeel is rich and silky with notes of caramel, toffee and spice.