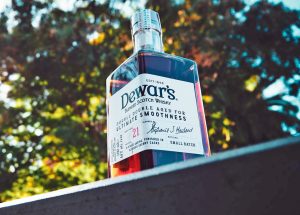 First off, as I am preparing to write this, I realized that yesterday’s bog did not post. Sorry for that! I was having website issues yesterday morning while prepping and for some reason it left it sitting there without going live. I’ll try to keep this from happening in the future, but sometimes things happen when everything is up to the minute! I am traveling this weekend, so I will be posting from remote locations the next few days. I will drop some hints as to where I am at in the posts. Pop your guesses in the comments!

Blended Scotch. We have presented two single malt whiskies in the calendar thus far, but this will be our firs blended Scotch. Before you get too disappointed in seeing “Dewar’s” you have to know that this whisky is definitely up there as one of my favorites, and it tells a cool story, which makes it more intriguing. Blending is an art. The Master Blenders in the major Scotch houses are the rockstars of the Scotch industry. These guys know their stuff, and when they put this much effort into a product that ends up like this Dewar’s Double-Double 21-Year-Old, you can see why they are rockstars.

The journey of this offering started in as two parallel batches of single malt and single grain whiskies aged indecently and married together in Oloroso Sherry barrels for finishing. The combination of barrels, extended aging and finishing lend to the primary descriptor on the label… “Ultimate Smoothness”.

Tom’s Tasting Notes: Dark mahogany color with a ton of viscosity considering the relatively lower proof. On the nose there is sweet honey, vanilla and dried fruit (from the sherry). The mouthfeel is as indicated on the label… Ultimate Smoothness. Thick on the palate with notes of toffee, honey and again dried fruit combined with pepper, toasted oak and some nuttiness.