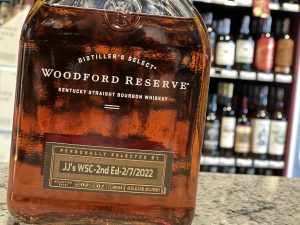 I really debated where to put this in this year’s Spirited Holiday Countdown Calendar but settled on here thinking we could sell a few more bottles before Christmas. That being said, it is sold out, so we have no bottles to sell. The last time we did one of these two-barrel blends, it didn’t sell out as fast, so I was optimistic that it would still be around at this time. Not so much. Why? Because it’s really good.

Last Fall I got a call from our regional Brown-Forman rep, Mike Galvin, asking if I was interested in another distiller’s blend from Woodford Reserve. I was somewhat hesitant, but we were able to include the experience in an already scheduled visit to bourbonland for a couple of other barrels. You may remember back in the Fall of 2019, ZJ and I went to Houston to do a distiller’s blend with Master Distiller Chris Morris (CMZT 1st Edition). It was a great experience, the whiskey was really good, but it didn’t sell all that well. The bottles came in at the beginning of the pandemic, so we were unable to promote as well as we would have liked or do a big release event. 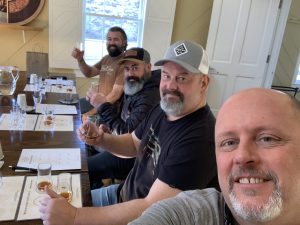 I decided to invite a think tank on this trip, as we had a couple of other barrels to acquire, and I can always use the help. So, I asked my good friend and bourbon enthusiast, Toby Benson to come along. I also invited Steve Hartman and Ryan Below from WoodGrain Brewing to join us. They decided they wanted to do some research along the way, so they drove down.

Our appointment at Woodford was on a Monday. The distillery is closed to visitors on Mondays, so figuring out where we were supposed to be was a bit of a challenge. But we made it to a quaint little tasting room in the middle of the campus and got straight to work. We were met by Elizabeth McCaul and one of her assistants. Elizabeth is the Assistant to the Master Distiller at Woodford Reserve and will take over as Master Distiller when Chris Morris retires. She is among a large number of women in whiskey that would be considered rising stars in the industry, so we were really lucky to engage in this selection with her.

The process was simple. We had three barrels to sample from. All at barrel strength (this is important). We tasted from each barrel individually to see what each barrel was going to bring to the table, then we would marry two barrels together. First 1 and 2, then 1 and 3, then 2 and 3. Our task was to find which of these two-barrel blends was going to be our final product. We ultimately decided on the combination of 1 and 3 (I think, it was a while ago). And at barrel strength, it was the best whiskey I had ever tasted. But, alas, we had to proof it down to 94.5, which is the standard proof for Woodford Reserve. It still tasted good, and you still get a good idea of what that barrel strength character was, but man, that barrel strength… 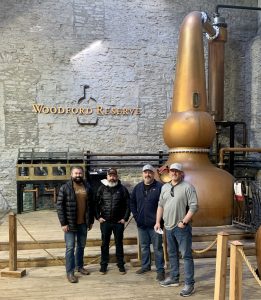 This led to a great conversation with Elizabeth about where she sees this program going. And to her credit, she had already been working on a barrel strength program for the distiller’s blending program for a while. However, Brown-Forman is notoriously slow when it comes to innovation, so any plans for an upcoming Private Selection of barrel strength Woodford Reserve is still to-be-determined. However, we have been assured that when it does happen, we will be first in line to participate! Thus, building on the future, so stay tuned! Elizabeth is also overseeing a major expansion at the distillery. The iconic 3-still logo will be obsolete when three more stills are added. Essentially double capacity. They were just starting the process when we were there in February, so it will be interesting to see progress next time we return!

Side note… a little chest puffing here. There are other Woodford Private Selection offerings out in the market. These are what are called “batch selections”, meaning a small batch was created for different flavor profiles and then offered to retailers as a Private Selection. Our 1st and 2nd Edition Private Selection Woodford bottles are blends of ONLY two barrels, and we are the ONLY retailer in the market that has participated in this program. And we have done it twice.

Tom’s Tasting Notes: I can’t say enough about what this whiskey tasted like at barrel strength. It does show a lot of the character from the barrel strength version… spice, vanilla, tons of toasted caramel and toffee, but the complexity dials down a bit with the 94.5 proof. Definitely a smooth sipper though and even better with a tasty cigar. On the nose… spice, vanilla, toffee and caramel. On the palate… Super smooth with sweet caramel notes, spice and a hint of toast on the finish.