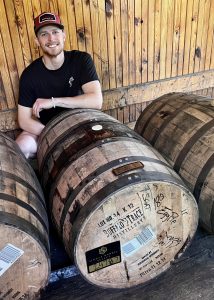 Ted “Egg Pie” Slattery and his barrel of Buffalo Trace.

This was our one and only barrel of Buffalo Trace for 2022, so of course it has to make the top three spirits in the 2022 Spirited Holiday Countdown Calendar. Another great pick by my June think tank. However, most of the credit for this pick goes to Ted “Egg Pie” Slattery as he led the discussion and had final say as this was his barre to select to commemorate his 25th birthday.

Tom’s Tasting Notes: Ted like bigger, bolder styles of whiskey, specifically bourbon. Which is funny, because just a couple of short years ago I don’t think he ever touched the stuff. He’s evolved (in a lot of ways) in the last couple of years, especially in his ability to pick a good barrel. On the nose we have undeniably Buffalo Trace aromas… slightly oaky, caramel, toffee, vanilla and cinnamon notes. On the palate it is very tasty with thick notes of caramel, spicy cinnamon, vanilla, toasty oak and a sweet, long finish.