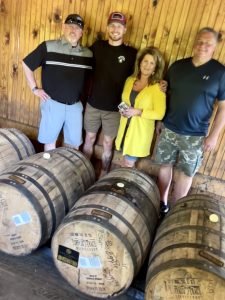 I know I am going to get a little bit of grief for this one. Mostly because of some feedback I have gotten already with folks speculating on what the Christmas Day pour will be. “I’ll bet it’s Pappy!”, “I’ll bet it’s BTAC!” I have heard a couple of people say. Some speculated that I might throw something other than bourbon on as the Christmas Day pour, but that wouldn’t be my style. I actually considered not telling you wha it was and let you guess. But that would be mean on Christmas morning.

I picked Blanton’s and this one specifically because this 2022 Spirited Holiday Countdown Calendar is all about the journey. And where we end up should be a place of familiarity, comfort and satisfaction. I don’t know about you, but this edition of Blanton’s Single Barrel checks all of those boxes for me.

This calendar is also about impactful. Was this particular spirit impactful in 2022? Absolutely. For a couple of reasons. One, it was our first barrel of Blanton’s since 2020. Second, based on number one, there was a lot of excitement surrounding its release. And we learned a ton about what we can do to offer more engagement, more fun and more exploration with brands like this as we progress forward into the new year.

Closing comments on this year’s calendar is below Tom’s Tasting Note.

Tom’s Tasting Notes: I had a glass of this last night while we opened gifts with our kids, and their significant others. I didn’t think too much about what I was experiencing while watching them tear through wrapping paper and beam with joy when the gift hit the right emotional trigger. However, when my glass was done, per my usual routine, I took a long sniff from the empty glass to get the last bit of memory recognition to store for later use. And what I smelled was itself an emotional trigger. The bottom of the Blanton’s glass smells like Warehouse H at the Buffalo Trace Distillery. I hadn’t noticed it before, but maybe emotions got the best of me and I was identifying what I was smelling and recognizing it as that something familiar, comforting and satisfying. Then it hit me… this smells like Warehouse H. If you have ever done a pick with me, you know what I am talking about. On the nose I get oak, caramel and burnt toffee notes with a hint of char and spice. On the palate it is thick, spice forward and balanced on the back end with those caramel notes and a hint of stewed fruit. Then, when the glass is empty, there is that smell. The smell of aging whiskey combined with aging wood and a bit of Grandma’s basement thrown into the mix. Familiar, comforting and satisfying.

With this our journey is over. I’ll be honest, it has been a little bit of a struggle getting these posts done in a timely fashion. As busy as we have been this month, it was necessary to get it all done in the wee hours of the morning so that I didn’t miss a deadline. It only happened once, but that was because I had to make Tom & Jerry batter and it kind of threw off my morning mojo.

Some would ask… Why don’t you just get all of the blog posts written and post them when the time comes? That’s an easy answer. For one, I like to write. For two, I like to express my thoughts as I feel them and can’t predict what is going to happen a week from now. I like these posts to be fresh with current events and current emotions, as that is important when guiding people on a journey.

So, what’s next? Who knows! We will probably do another whiskey bracket challenge like we did last year for March Madness. That was a lot of fun and very eye opening as two relatively identical whiskies ended up head-to-head in the final round. We will definitely do another calendar next year. The most common feedback we get is “Can you make the portions larger?” and the answer is no, it’s the only way we can make it cost effective as we do need to make some money. These things are a lot of work to put together, and require a lot of man hours filling, tagging, boxing, etc. Best advice I could give is that if you want more than a 1/2oz of each spirit, buy a second set.

Anyway, I hope you have found this journey fun and fulfilling. If you were just looking for a daily drink, then this may not have been your jam. But if you were truly engaged in the journey, then I hope you learned something and thank you for coming along!

Have a Merry Christmas and Happy New Year!